After visiting the exhibit, Homefront and Battlefield: Quilts & Context in the Civil War, at the New York Historical Society Museum & Library, I was able to view actual Civil War quilts. This experience was more up close and personal. Learning about quilts and viewing online pictures didn’t compare to seeing them in front of you. I was able to get close enough to see the stitching of the patterns.

Before traveling to the museum, I was not sure what types of quilts and information I would find. To my disappointment, there were no slave quilts with secret messages. In fact, one of the displays mentioned the idea that a quilt code guided fugitive slaves north to freedom is often taught in school as a historical fact but, the code was never reported by any slaves that escaped or any Underground Railroad assistants. The same display also mentioned that the “fictional” idea of the quilt code does a disservice to the true heroism of those who escaped and those who aided in the journey. When I read this sign, I was saddened because I have read about Ozella McDaniel William’s account of the quilt codes and the sign at the museum did not even acknowledge her story.

The quilts that were displayed were made from both slaves and free citizens during the time of the Civil War. Some quilts conveyed political messages and patriotism for either the Confederacy or the Union. Many of the quilts had stories to go along with them. Sergeant Stephen A. Lewis was injured during the war and was saved and taken care of by a slave woman. The Sergeant made a quilt out of Confederate uniforms and from the scraps of blankets that he was given while he was recovering. Because the slave woman saved his life, he offered a safe haven for any African American up until his death in 1923.

I also learned of others that escaped slavery by using the Underground Railroad. Those that escaped were eternally grateful and tried to help as many others travel to the north and gain their freedom. Quilts were made to serve as reminders and to tell stories, especially since the slaves were illiterate. Quilts were an important part of their livelihood. The quilt itself served as a means to speak to future generations, to reach beyond the grave, and to educate people about their culture.

The “Reconciliation Quilt” made by Lucinda Ward Honstain was created in 1867. The quilt shows elements of Lucinda’s personal life, political, and social events during this time. Due to the name of the quilt, some might say that its purpose was for unification and to forgive what had happened in the past, but not forget. Unfortunately, we know from history that with the emancipation, the African Americans did not receive equal rights and even today, racism still has a hold on many people. 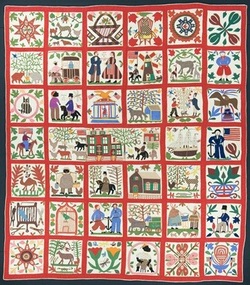