The historical nonfiction book, Hidden in Plain View by Jacqueline L. Tobin and Raymond G. Dobard, presents the idea that quilts were used to assist the escape of the enslaved through messages. The author presents these tellings as total fact. Tobin interviewed quilter, Ozella McDaniel Williams, for over a period of three years and much gained information about the mysteries of the quilts of the Underground Railroad and the Civil War. With the research and help of Raymond G. Dobard Ph.D., an art history professor at Howard University and a wide-known African American quilter, he and Jacqueline L. Tobin were able to piece together the connection between the Underground Railroad and the quilts of this time.

Through the use of oral tradition, there have been accounts of secret messages that were part of the Underground Railroad. Some have said that specific signals had understood meanings for those who were traveling on the journey to freedom. The signals were prearranged and unwritten. For example, lit lanterns on coachman figures were used to communicate to the traveling slaves that these homes were a place of refuge.  No light meant that the slaves would have to keep traveling to find a safe haven. The stories that proclaim that quilts were also used as signals for the slaves has caused disputes among historians. During the time of the Civil War, it was illegal to teach slaves how to read and write. Thus, slaves relied on oral communication. Unfortunately, the oral testimonies were not seen as substantial proof to support the idea of secret quilt codes for most historians. If historians dispute the accuracy of the codes due to the only evidence being oral transmissions, then it could also be seen as hypocritical that they at the same time, acknowledge the African tradition of storytelling. Slaves were brought from Africa to America. When they got to America, the traditions did not stop. In Africa, their culture was based on oral tradition. In each tribe, there was a storyteller who was responsible for remembering and communicating the history of the tribe to other members. If it is recognized that Africans relied on oral tradition and when they came to America that tradition, of course, continued. Therefore, it is hard to understand why the stories of the Underground Railroad and the quilts cannot be seen as credible. Another factor that diminishes the credibility of the quilts being used in this manner is the lack of slave quilts from this time period. But it has to be taken into consideration that the slaves did not have high-quality fabric to use when making quilts. Over time, the quilts were likely to fall apart and become destroyed. Also, excessive washing with lye soap would cause the quilts to disintegrate.

This book led to a great amount of speculation because there is no concrete proof about the existence of the alleged secret codes. Without concrete evidence such as written documentation of these codes dating back to the civil war, many people found this idea hard to believe. To this day, people still classify the messages as myths. What it really comes down to is what one believes constitutes as enough evidence. To me, the lack of written proof of these codes makes sense because the vast majority of slaves were illiterate. Without being able to read or write, how would you expect someone to write down information during this time period?  The African Americans passed on their customs and history through stories and oral tradition and that, unfortunately, cannot be boxed and preserved in a museum. Also, the messages were secretive. If they codes were written down, there was a risk that someone would find the codes and ruin the whole Underground Railroad System. Since the slaves could not read or write, symbols would serve as a way for them to understand messages, such as the direction in which they should travel or if a place was safe to stay. This also ties into the tradition of African American quilt makers of this time and of the past because the quilts told stories.

In 1994, Jacqueline Tobin traveled to South Carolina to learn about the craft of basket weaving from the women who make them. Charleston, South Carolina, is known to be rich in history. While exploring a marketplace, she came across a stand with an array of quilts. This was the stand of Ozella McDaniel Williams. Mrs. Williams approached Ms. Tobin and told her that the quilts were used by the slaves to communicate on the Underground Railroad. Ms. Tobin did not ask her any further questions but she was intrigued by the information she was given. She decided to call Mrs. Williams to ask questions and to see whether she would be willing to disclose more information. When they spoke on the phone, Mrs. Williams told Ms. Tobin that she is not ready yet to know more about the quilt but, in time, she will find out. For three years, Ms. Tobin conducted research and enlisted the help of Mr. Dobard. She decided that the only way to find out more information was to revisit Charleston again and find Mrs. Williams at the same stand that she had met her three years earlier. When she arrived, Mrs. Williams motioned for her to sit down and listen to what she had to say. The story that Mrs. Williams shared was passed down from her grandmother to her mother and then to her. She told Ms. Tobin to write down everything. From the information that she was given, Ms. Tobin and Mr. Dobard worked hard to put the pieces from Mrs. Williams together.

Even if you do not believe that quilts held secret messages that helped slaves travel the Underground Railroad, the legacy of Civil War quilts can still be incorporated into multi-subjects. In social studies, students will learn about the Civil War and the Underground Railroad through a variety of resources. Stories about the Civil War, Underground Railroad, and the quilts, both nonfiction and fiction, can be used in English classes to help students learn about this time period in American history. In art, students can make their own quilt patterns and describe the meaning behind their selections. Patterns can be created based on their own secret message. In math, students can investigate patterns and tessellations of the quilt patterns and make their own inferences. The quilts can also be examined to learn about two -dimensional transformations such as translations, dilations, reflections, and rotations. By taking this one subject matter across the curriculum, students can become engaged through this topic in a majority of classes. Also, by exhibiting how this one topic can be applied in numerous classrooms, students have a better chance of retaining the information and it leaving a lasting impression on them. The more meaningful the work is along with the consistent repetition, the more likely the students will retain the information and be able to recall the learning experiences. 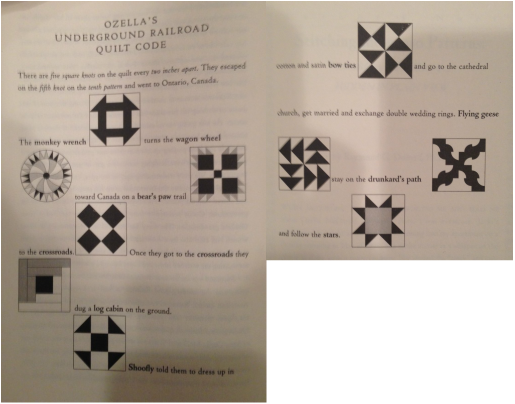 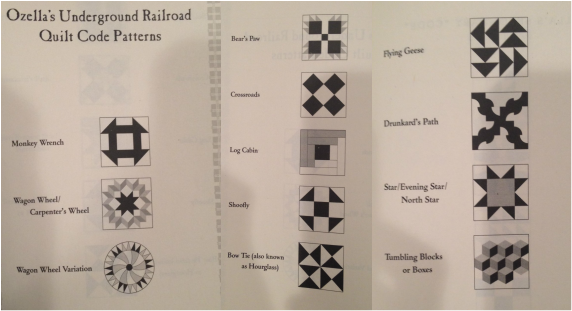 Monkey Wrench - gather all of the tools that you will need on your journey (including physical, mental, and spiritual tools)

Shoofly - identifies a person who can guide and help

Log Cabin - indicates that it is necessary to seek shelter

Crossroads - refers to Cleveland, Ohio, which had many paths to freedom

Britches - indicates that those escaping must dress as a free person 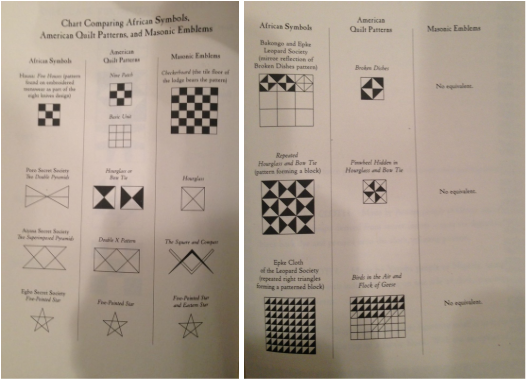